Do you need to do a sugar detox?

It’s frighteningly easy to get way more sugar in your diet than you think.  This recent article lists common signs that you’ve been having too much of the sweet stuff – from bad skin to cravings to bloating and rock-bottom energy levels

By Cheyenne Roundtree for Dailymail.com

Difficulty sleeping, constant breakouts and exhausted taste buds may all be clues that you are suffering from a sugar addiction.

Doctors, health gurus and nutritionists have long called for people to cut back on sugar intakes because it can cause weight gain, cavities and a host of other issues.

However, the sweet stuff lurks in seemingly guilt-free or savory food, including salad dressings, bread and coffee drinks.

A majority of people who are dependent on sugar don’t realize they are hooked on the sweet stuff until they learn the tell-tale signs.

Nutritionists have flagged the 10 clues that indicate a sugar addiction and provide tips on how to completely detox the body of it.

Sugar can wreak havoc on the body, causing weight gain, tooth decay and insomnia. However, people may not realize these are the signs of too much sugar

Constant flare ups of acne is a major flag that there is too much sugar in the diet, health expert Natalie Lamb said.

The British Lepicol Lighter nutritionist said excessive sugar consumption can contribute to an imbalance of the female menstrual hormones and could result in acne along the jaw.

The white stuff can also cause long-term damage to the skin proteins, collagen and elastin, leading to premature wrinkles and aging, Lamb said.

Breakouts are also caused by inflammation, which sugar promotes. A study by the University Hospital Zurich proved this in 2011.

The researchers found that by drinking one can of soda a day, inflammation levels went up by 87 percent and increased by 105 percent after two cans of soda.

Nutritionist Lorraine Kearney said taste buds eventually adapt to the high levels of sugar the body is consuming, dulling the sensation over time.

Sugar tolerance will increase with every bite of a frosted doughnut so eventually a food will have to be extra sweet to even notice how sugary it is.

Kearney said: ‘Sugar is like a drug as that it keeps needing more and more sugar to reach the same level that it had at first.

‘So something that seemed super sweet at first eventually tastes normal.’

A sugar rich diet may be fueling various forms of cancer, as new research confirms a long suspected belief.

Previous studies have suggested that tumors thrive off sugar, using it as energy to mutate and spread across the body.

Now scientists have shown one type of cancer – which can be found in the lungs, head and neck, esophagus and cervix – has more of a sweet tooth than others.

This form of the disease used higher levels of a protein that carries glucose to cells to enable them to multiply, they discovered.

Health officials across the world have stood firm on their stance towards sugar in recent years, despite growing evidence showing it to potentially fuel tumor growth.

Instead, they highlight the fact that all cells, not just cancerous ones, require energy, which is found in the form of glucose, to survive.

Pearly whites are more at risk for cavities when there is a higher sugar intake.

According to the National Institute of Dental and Craniofacial Research (NICDR), bacteria in the mouth feeds on sugars which creates harmful acids.

These acids then destroy tooth enamel. Cavities are formed by the acids that create a bacterial infection which leaves a hole in the tooth.

It’s important to brush after eating sweet meals to rid the mouth of leftover sugars.

Kearney, who is based in New Jersey, reiterated that the body reacts to sugar like a drug, constantly needing more to achieve the same sugar high.

She said: ‘A lot of people eat blindly, consuming whatever sounds good or what is available because they are too focused on other things.

‘We may not realize we are really craving sugar when we want a bagel. Foods don’t have to be candy or pastries for them to have lots of sugars.

Lamb added: ‘Sugary foods are sweet and addictive, giving us a quick ‘fix’ that tempts us back time and time again.

‘Foods high in sugar have been shown to activate the reward pathway in the brain by releasing dopamine, similar to that of addictive drugs.’

Sugar saps energy from the body, commonly known as a sugar crash.

Lamb said: ‘Glucose is essential for energy production throughout the body, however, it is important to keep blood sugar levels balanced as opposed to experiencing the peaks and lows that occur when we binge on sugary snacks.

‘Following the consumption of sugar, the pancreas releases insulin to help transfer glucose to the cells, meaning we may experience a rush of energy.

‘Once used up, we can experience a dip in energy as the body demands more sugar to start the cycle all over again. It is not hard to imagine that the higher the sugar peak, the more extreme the sugar dip that will follow!’

A common type of sugar is fructose, which is found in apples and peaches, as well sweeteners such as high-fructose corn syrup.

Experts say the substance is responsible for flatulence and bloating because fructose isn’t easily absorbed by the body.

Lamb said: ‘Less desirable bacteria and yeast produce gases when they ferment our undigested food in the colon.

‘Bad bacteria particularly love eating sugars, whereas beneficial bifidobacteria, who love veggies, are not believed to produce any gas.

‘An overproduction of gas can lead to pain after eating, uncomfortable bloating and embarrassing flatulence.’ 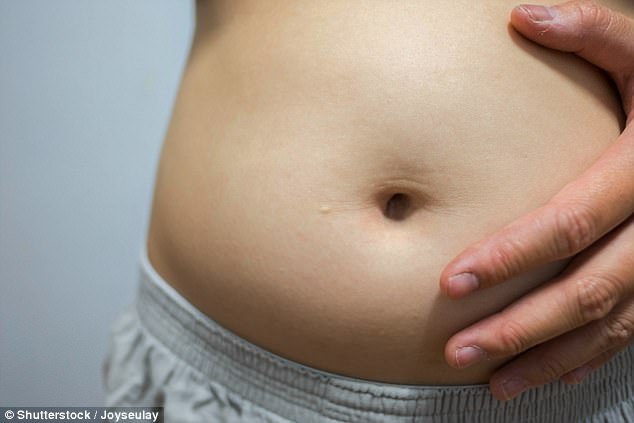 Got a larger belly? Sugar leads to bloating and embarrassing flatulence, experts say

REVEALED: WHAT SUGAR REALLY DOES TO YOUR BODY

By Mia de Graaf for Dailymail.com

Sugar interrupts the supply of important neurotransmitter precursors through the blood-brain barrier – and particularly ones that help produce serotonin and dopamine, which influence mood.

Too much sugar can increase the risk of anxiety and depression due to a mix of energy rushes after ingestion followed by subsequent sugar crashes.

Sugary foods convert to glucose, which causes insulin to be released in a matter of minutes. This rapid process raises the heart rate, as well as the risk of high blood pressure.

The liver struggles to process excessive amounts of sugar. The unprocessed sugars are converted to fat calls, which are distributed throughout the body.

As a result, you can gain weight and are at risk for fatty liver disease and even obesity. Over time, the liver can become resistant to insulin which can lead to elevated insulin levels throughout the body.

Too much sugar in the body can cause bacteria to migrate from the colon to the small intestine, where nearly no bacteria is present.

As they proliferate on the foods digesting in the small intestine, it can cause bloating, acid reflux, gas and abdominal cramping.

Kearney said a person who has too much sugar will experience a dip in their sex drive.

She said high levels of sugar in the bloodstream helps shuts down a gene responsible for producing sex hormones, causing a drop in libido.

Men with too much sugar in the bloodstream may develop erectile dysfunction, according to a John Hopkins study in 2005.

The researchers found a type of sugar can interfere with ‘the chain of events’ needed get and keep an erection.

The study also found that 50 to 75 percent of men with diabetes had erectile dysfunction, which is three times higher than non-diabetic men.

Too much sugar weakens immune system cells that attack bacteria, according to WedMD.

So when the cells are slowed down by sodas and pastries, they have a harder time keeping the body healthy and attacking harmful germs.

Lamb said a large majority, or 70 percent, of the immune system is located in the digestive system and is supported by healthy guy bacteria.

She added: ‘A diet high in sugar, however, will feed the less desirable bacteria and yeast and consequently affect the how well the immune system functions.’

Kearney said weight gain is one of the most obvious signs that a change in diet should be made.

The nutritionist said when the body has too much sugar, it’s stored to be converted into energy later.

But if the sugar isn’t used as energy it just becomes fat, hanging around in unwanted areas like the stomach.

Kearney said: ‘Some whole foods have high levels of natural sugar, like apples but don’t have good levels of fiber to help break down waste.

‘Processed foods don’t have high levels of fiber and are loaded with sugar.

‘This means that the sugar is turned into fat and there is nothing to rid the body of waste, which leads to weight gain.’

Sleeping problems is another tip-off that it’s time to cut back on sugar.

Lamb added: ‘Insomnia could mean you struggle to fall asleep or have a broken night’s sleep.

‘Our ‘happy hormone’, serotonin is largely produced in the gut and is essential for melatonin production – the ‘relaxation’ hormone – necessary to aid a good night’s sleep.’ 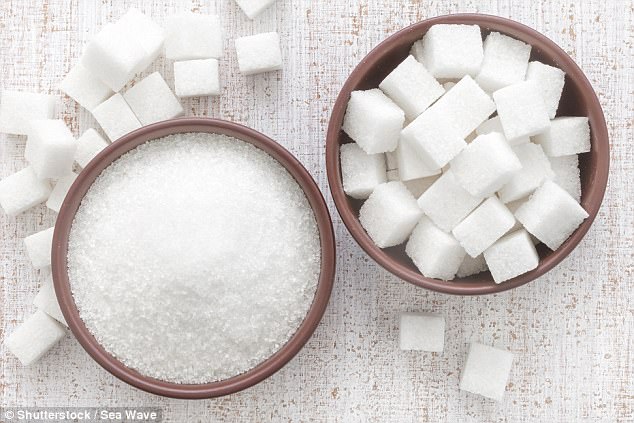 Too much sugar is evident if you are having breakouts, a low sex drive and are gaining weight

HOW TO DETOX FROM SUGAR

Kearney said if a person sees most of these warning signs in their life, then it means it’s time for a detox.

The nutritionist recommends a full 21-day sugar detox in order to completely clear out the body of the harmful sugars.

During this period this means cutting out processed foods and eating whole foods for nearly a month.

Kearney said the body can also benefit from a 14-day detox, but encourages clients to try the month of no added sugars.

She said: ‘In the 21-day detox you are increasing consumption of high fiber foods while maintaining blood sugar levels. There’s no pasta, no rice, no sugar-heavy fruits.’

The premise of the detox is simple – no added sugars or sweeteners.

Kearney said after the first few days, you can slowly start adding fruit into the diet but warns against bananas, limes and lemons.

Over the course of the 21 days, some foods not to eat include coconut water, beans, rice, quinoa and beets. 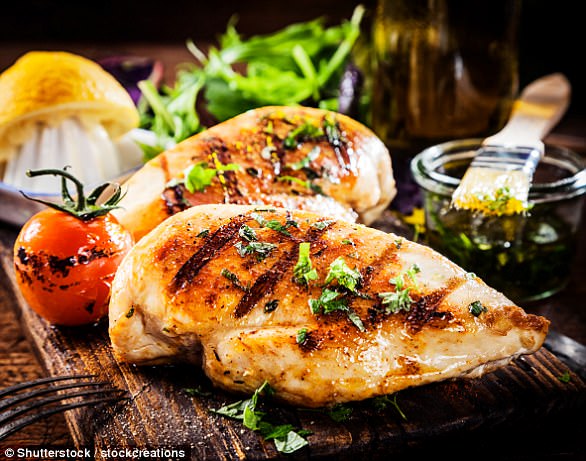 Lunch: Poached Chicken Breast with mixed baby greens and half an avocado 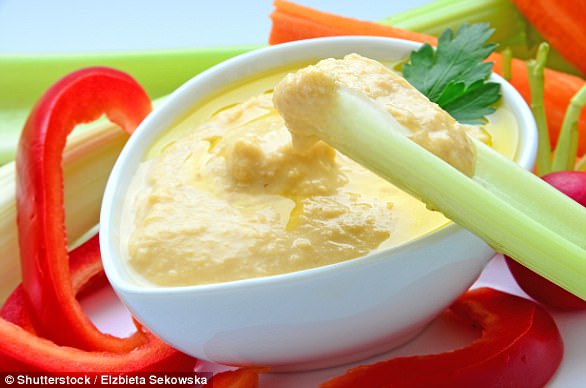 Resist cravings for something sweet and try savory foods instead, such as hummus

Drinks allowed over the three days: One cup of unsweetened black coffee per day, unsweetened green and/or herbal tea in unlimited amounts, minimum 64 ounces of water a day